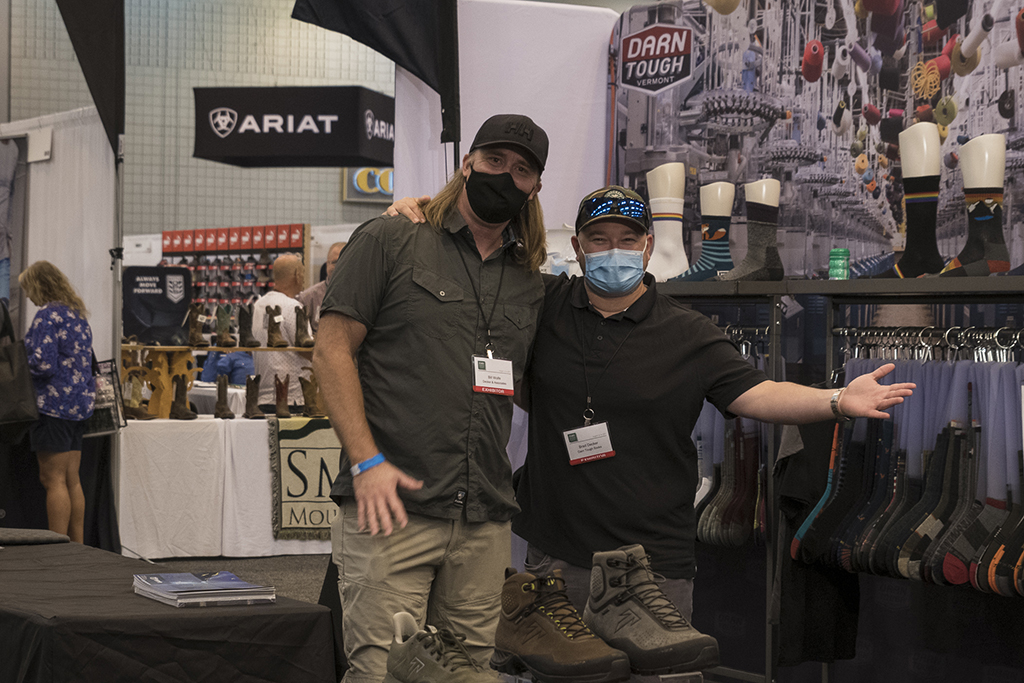 Despite the uncertainty surrounding the Delta variant and the coronavirus resurgence, exhibitors at the Atlanta Shoe Market were optimistic about the market heading into the end of 2021 and the beginning of 2022.

“We feel like this is the best shoe show in the U.S.,” said Jud Taylor, general manager for Twisted X. “Buyers come from all over the country, and they are excited to see products in person. It’s been as busy as it’s ever been.”

“This was a very solid show,” added Jeff Shipley, VP of sales for H.H. Brown. “We were writing orders. It was better than expected. We had a few last-minute cancellations, but walk-ins more than made up for it.”

Brandy LaPlante, territory sales manager for Ecco, said the brand was determined to “show so we have made it to the other side [of the pandemic].” “Business has been strong; we were fully booked,” LaPlante said.

Laura Conwell-O’Brien, executive director of Southeastern Shoe Travelers Inc., which puts on the show, said pre-registration numbers of retailers were down 1 percent from the February 2020 event, which was to be expected. There were 2,000 pre-registered retailers and 760 exhibitors.

“There was some last-minute fallout from [worries over] the Delta variant,” she said. “But we did pick up a lot from the West Coast and East Coast. The show has steadily grown over the 40 years that Conwell-O’Brien has built it, and she noted that it remains attractive to be in Atlanta because of the relatively low cost of exhibiting, the ease of travel and other amenities. “When we started, we didn’t have beaches or casinos or Broadway, so we made it the best ROI and order-writing show,” she noted.

Exhibitors at the show were enthusiastic about seeing customers face-to-face and overall success of the Atlanta show.

Seeing people in person helps build relationships, said Jon Brookings, VP of sales for Propet. “Zoom has some value, but there is value in empathy and understanding where someone’s business is.”

“We think it’s important to see our customers face-to-face,” added Trey Beckett, territory representative for Danner and LaCrosse. “It makes sense for the brand to be here.” He said while he thought traffic was down, the buyers in attendance were busy writing orders. “Now more than ever, there are stores that need products. It was a lot of quality [buyers] over quantity.”

Renee Newman, VP of sales at Aetrex, said the show had been fruitful for the brand. “It’s good to get in front of customers. This is the biggest [show] with lots of customers,” Newman said.

As 2021 heads into the fourth quarter, shoe execs expressed concerns, however, about persistent inventory and supply chain struggles.

Beckett of Danner agreed. “Our biggest challenge is getting product and fighting for inventory. It’s a priority to get as much product as possible.”

Inflation pressures also were on exhibitors’ minds, with everything from materials to shipping increases factoring into pricing.

Delivery, freight and cost of materials are impacting prices, Shipley said. “Prices have gone up [for the company] maybe 5 percent on average,” even though he said the average has been about 8 to 14 percent. “We’re trying to be as competitive as we can.”

“Everyone is raising prices,” said Stephanie Pena, account executive with Chinese Laundry. “I do worry about how the consumer is going to suffer,” but the increases are necessary. Still, she noted that even with inflation and inventory pressures, the company saw double digit increases over the 2019 show. “There’s a lot of positive feelings.”